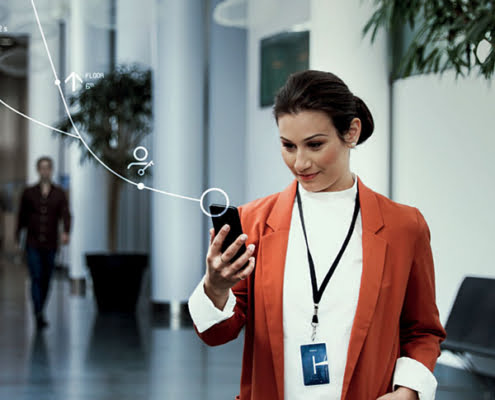 The future is now. How can a Facility Manager benefit from new, connected technologies?

The world is becoming urban. According to the United Nations, the number of people living in cities is expected to increase from 3.4 billion in 2009 to 6.3 billion in 2050. As population booms, infrastructure needs to cater to new levels of people flow, while increasing convenience and safety. City planners need to seize the opportunities of smarter infrastructure to move huge numbers of citizens quickly and safely around the clock. At the same time, energy consumption and environmental impact must be kept to a minimum. The same needs apply to individual buildings.

According to the UN’s 2018 Revision of World Urbanization Prospects produced by the Population Division of the UN Department of Economic and Social Affairs, 55% of the world’s population lives in urban areas, a proportion that is expected to increase to 68% by 2050. Projections show that urbanization, the gradual shift in residence of the human population from rural to urban areas, combined with the overall growth of the world’s population, could add another 2.5 billion people to urban areas by 2050, with close to 90% of this increase taking place in Asia and Africa. The most urbanized regions include Northern America (with 82% of its population living in urban areas in 2018), Latin America and the Caribbean (81%), Europe (74%) and Oceania (68%). The level of urbanization in Asia is now approximating 50%. In contrast, Africa remains mostly rural, with 43% of its population living in urban areas.

In an increasingly urbanized world, new technologies and new businesses are changing expectations. There is a tremendous opportunity to serve customers in new ways and meet the demands of urban environments. Digital technologies and connectivity enable access to new types of services and Utilities that are cheaper, more energy-efficient and easier to use than ever before. New technologies that were once only available to a few are becoming widespread across the globe.

We use cookies to ensure that we give you the best experience on our website. If you continue to use this site we will assume that you are happy with it

We may request cookies to be set on your device. We use cookies to let us know when you visit our websites, how you interact with us, to enrich your user experience, and to customize your relationship with our website.

Click on the different category headings to find out more. You can also change some of your preferences. Note that blocking some types of cookies may impact your experience on our websites and the services we are able to offer.

These cookies are strictly necessary to provide you with services available through our website and to use some of its features.

Because these cookies are strictly necessary to deliver the website, refuseing them will have impact how our site functions. You always can block or delete cookies by changing your browser settings and force blocking all cookies on this website. But this will always prompt you to accept/refuse cookies when revisiting our site.

We fully respect if you want to refuse cookies but to avoid asking you again and again kindly allow us to store a cookie for that. You are free to opt out any time or opt in for other cookies to get a better experience. If you refuse cookies we will remove all set cookies in our domain.

We provide you with a list of stored cookies on your computer in our domain so you can check what we stored. Due to security reasons we are not able to show or modify cookies from other domains. You can check these in your browser security settings.

We also use different external services like Google Webfonts, Google Maps, and external Video providers. Since these providers may collect personal data like your IP address we allow you to block them here. Please be aware that this might heavily reduce the functionality and appearance of our site. Changes will take effect once you reload the page.